In a world where Customer Experience is key, Gumtree, the leading online classifieds website in England, is telling me to f*ck off. Something that I will do indeed as their TOS are crystal clear (they can restrict access with no explanation due), but not without telling the story first.

It all started this morning: after having signed up using my 10 years old Google account and my real name (which, even if I’m not Donald Trump, should have a decent reputation and trust online) I posted an AD for my HP DL320e (and even paid to have it featured). Location was my real postcode (which you can verify in public records) and I paid with an UK credit card (just another way for them to verify my identity).

Good experience up to that point: nice and easy UI, clean workflow. The AD went into moderation queue, but after a while it moved straight into the “Removed” state: 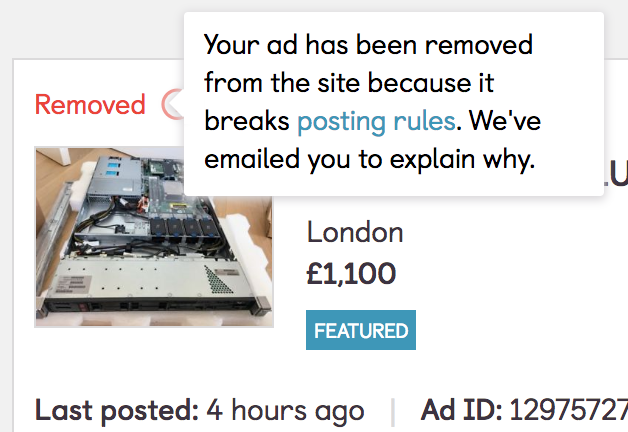 I asked for support on Twitter, genuinely thinking it should have been a mistake of some automated fraud prevention system (a very cheap one, probably):

Nice start. My first ad on @Gumtree (#1297572744) was removed because it breaks an unspecified rule. No additional details, no emails to explain. @HelpMeGumtree

The only thing I managed to get back was this response via DM, which classifies as the worst and unnecessarily rude answer I ever got from someone’s customer care department: 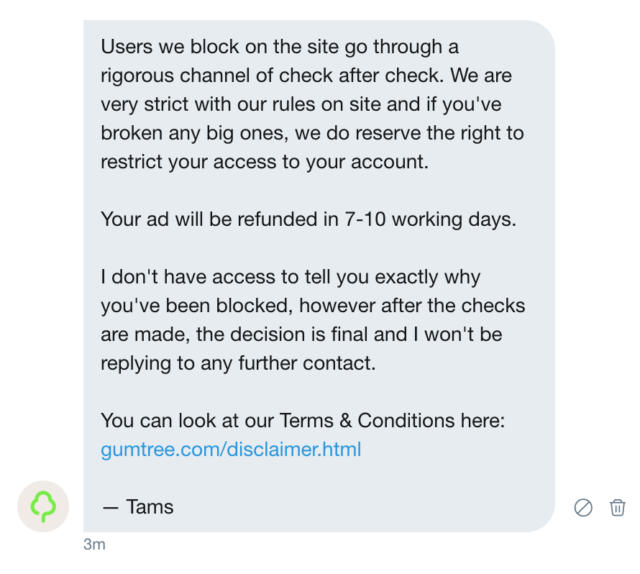 I tried to appeal by sending an email to their support department, hoping for a deeper review and consideration.

And it happened: someone came back to me apologising and explaining that my AD and account were absolutely fine, no rule had been broken and that the block was the result of a mistake. It would have been lifted immediately.

The end of an odyssey, you would think. Well, no: two hours later my account got blocked again, and this email landed in my mailbox: 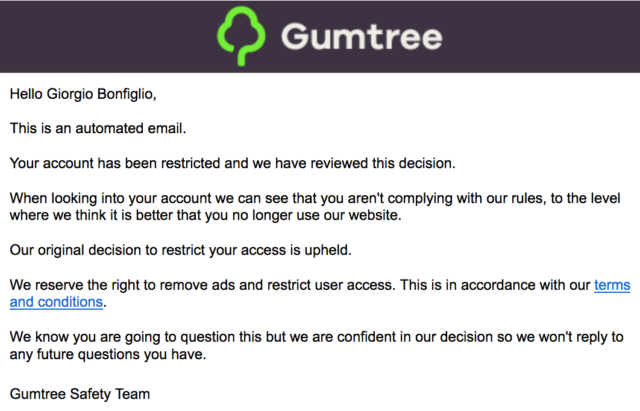 In short, I’m now permanently banned. They won’t tell me why and won’t answer any further query on the matter. I would love to dig and figure out what’s wrong, but I’m in front of a brick wall.

Let me make a couple of assumptions: I’ve been blocked before having published my first AD, so I can’t have been reported by other users. The only things Gumtree knows about me are:

We already have a word for when you are denied something based on those four parameters: discrimination – and this is what’s happening here.

If anybody from Gumtree wants to get in touch and explain feel free, you have my contact details.

One thought on “Customer experience and discrimination on Gumtree”