Yes, I’m back: this blog has been abandoned for like three years now, and I feel it’s time to bring it back to life. There is no particular reason behind this choice: I just need a virtual place where I can express my ideas and aggregate content I’ve always been disseminating over the internet for free (comments, forum posts, and so on).

New life means new theme (still in its basic version) and new language: some of my old posts are being read trough Google Translator, and as in the last few years my main language (mainly due to my job(s) and relationships) has been english, I have no reason at all to keep posting in italian. It’s just going to restrict my audience.

This time I won’t do what I did in all the previous “renovations”: I won’t destroy the old posts. The first one dates back to 2009 and I think they are a pretty important piece of history for them to disappear from the internet. I’m recovering the backups of the old versions of this blog in order to merge them with this one.

So, what has changed in those three years?

First, and maybe most important choice to date, I decided to put on hold (and then completely abandon) my studies at the University (Politecnico di Milano). This choice has been strongly dictated by the context (I was attending in Italy): although I perfectly understand the importance of learning the basis and developing a method for “doing things”, I felt what I was studying was too far behind reality. Spending years and thousands of euros to end up working as an underpaid intern in some big company was definitely not what I was expecting from my life.

The networking manual we were using (please mind it was 2013 and it was still being printed and was largely adopted) at a certain point stated that Ethernet was being superseded by FastEthernet, and that some big ISPs were deploying experimental long haul GigabitEthernet links. This was way too much (for non technical people reading this post: in 2013 we were already in the Terabit/s era, with multiple 100GigabitEthernet -100 times GbE- being used in long haul transits): reading this sentence, and then seeing that people that was able to get the best marks at the exam while thinking that GbE was the future (and not the past), helped me realize how detached from reality we were.

I decided to stop wasting time and joined CloudAcademy, a company that is trying to explain and show people how to take advantage of cloud services, as the Training Paths Supervisor. Feeling I had to head back to the battlefield, I decided in a few months to move to Enter, an italian ISP/CSP which at the time (late 2013) was working on the launch of a new multi-region OpenStack-based IaaS service, Enter Cloud Suite.

In Enter I have been employed first as a Cloud Architect and then as the Head of Cloud Architecture, with ECS as the main focus: I spent 2 years and a half designing and implementing hosting infrastructures for large scale news and e-commerce websites and designing, implementing and sometimes managing the OpenStack infrastructure behind Enter Cloud Suite. I was focused on the networking stack (both physical and overlay), and this gave me the opportunity to meet some very interesting realities like Cumulus Networks and Mellanox.

Then, in the first months of 2016, Amazon Web Services called: they offered me a position as a Technical Account Manager in London and I decided to accept it and move from Milan: everything happened so quickly I still have to realize what this means.

It’s very hard to explain what does it feel like being part of such a fast growing company, the one that has been the reference for your entire working life. “Work Hard. Have Fun. Make History.” is our slogan, and what it is all about: I’m sitting in the buildings where history is being written, day by day.

That’s it. This is the story of how I ended up writing this post, while laying on the bed in my apartment in Canary Wharf.

This is definitely a new beginning, and not just for this blog. 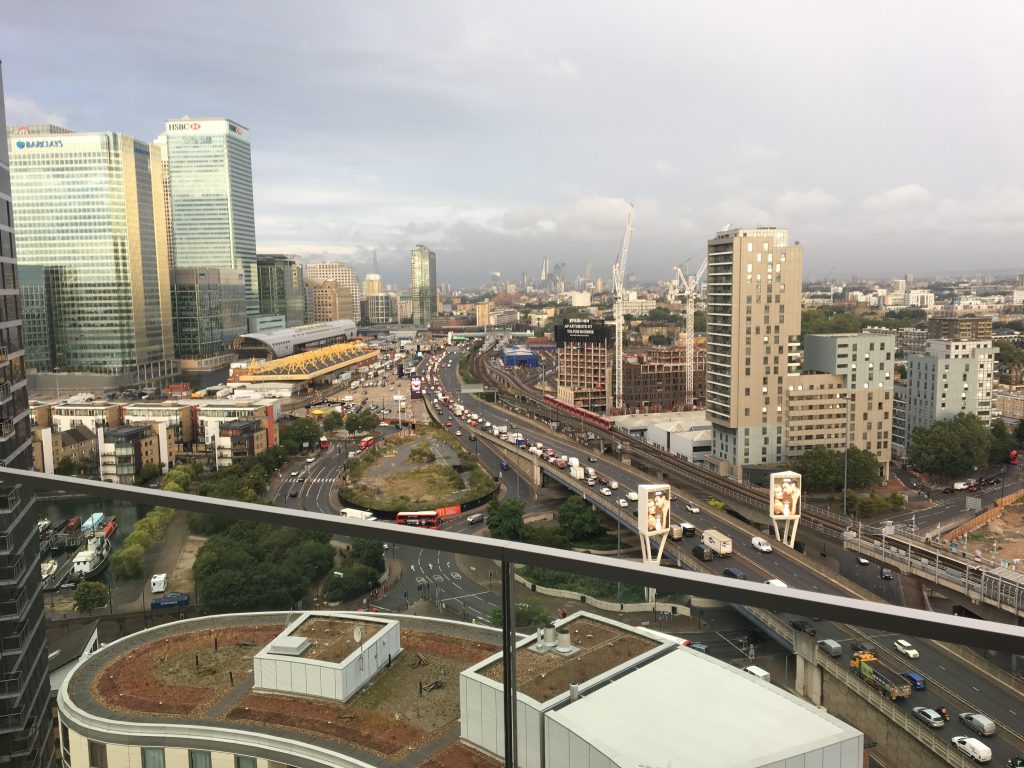 As you wait for the next post, please enjoy the view from my bedroom.

One thought on “Giorgio is back!”